It all started on May 5th at the 144th Kentucky Derby®, then escalated at the Preakness Stakes this past Saturday the 19th, now, it all comes down to the 150th Belmont Stakes on June 9th. Justify has won two of the three legs of the Triple Crown™. The question on every horse racing fans mind is, can he win it all and become the 13th Triple Crown™ winner?

Justify proved himself to be special the minute he crossed the finish line in first place at Churchill Downs®. He became the first horse since 1882 to win the Kentucky Derby® without having raced as a two-year-old. Justify’s racing career only just began in February of this year at Santa Anita Park. 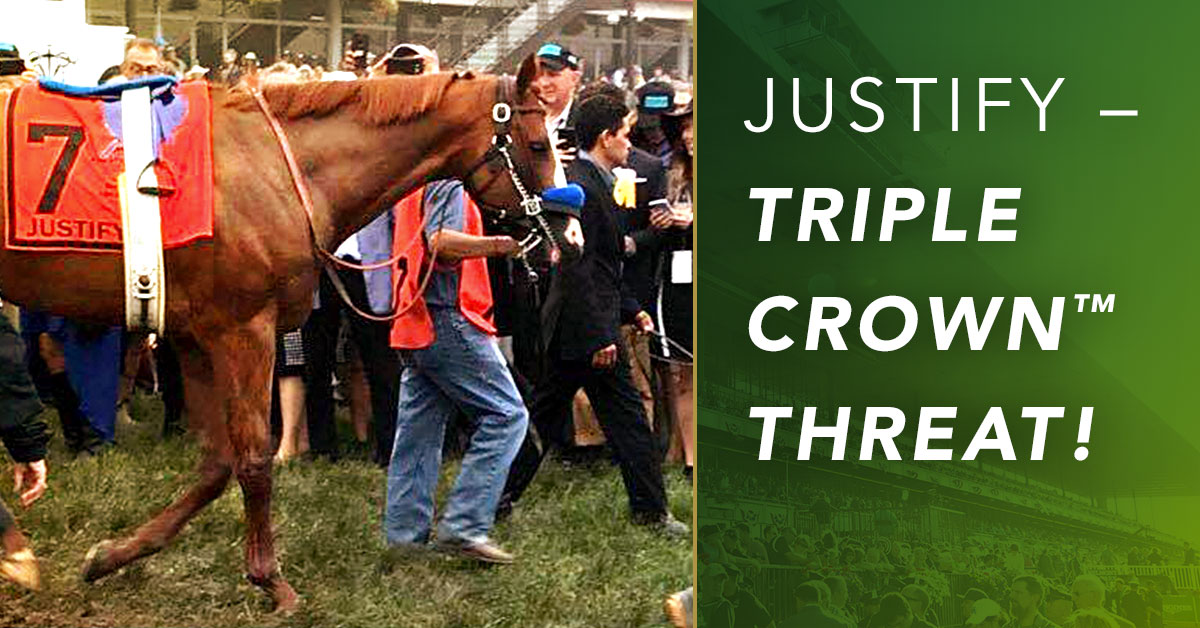 We’re breaking down Justify’s road to the Triple Crown™ starting with the Kentucky Derby®.

Justify was the favorite going in to the Kentucky Derby® and pulled it off through the rain and mud to earn legendary trainer, Bob Baffert, his fifth Kentucky Derby® win. He was the 5-2 favorite in a field of 20 colts and ran 1 and ¼ miles in 2:04:20.

Justify leaped out of the number 7 spot in the starting gate and got away clean, which Baffert said he needed to do to stand a chance. Smith and Justify took the lead entering the final turn and finished in first.

Justify’s jockey, Mike Smith, came out of what was the wettest Derby in history, with only a few specks of mud on his green and white silks. Post-race, the 52-year-old jockey said, “He’s got that ‘it’ factor. He is so above average, he’s got unbelievable talent and he’s got the mind to go with it. He was loving this stuff.”

The start of the Preakness Stakes looked all too familiar for Justify. It was a rainy, wet day and he was saddling up to take the 7th post position at the starting gate, just as he did for the Kentucky Derby®. Justify broke from the starting gate with a clean start once again, which was crucial for his racing team.

Good Magic gave Justify and Smith a run for their money as they went neck and neck for most of the race. With very low visibility from a mixture of rain and fog, the race was a challenge for all the horses on the track. “It was a nail-biter,” Baffert said. “It was like they had their own private match.”

In the end, Justify became the 24th horse in history to win both the Kentucky Derby® and Preakness stakes.

In just over two weeks, Justify will race to become the 13th Triple Crown™ winner. You can be there to witness history in the making at Belmont Stakes through Belmont Experiences, the only source for clubhouse seating. Offering two Official Ticket Packages you can get everything you need in one place to make your trip to the last leg of the Triple Crown™ a memorable one!